The Yost - Gedon Funeral Home & Cremation Services LLC has been in continues operation for over 182 years, operating as a funeral home 1 ½ years before Clinton County was established……

Founded In 1838 by John French Sloan, the funeral home pre-dated the establishment of the city of Lock Haven by one year. At that time it was located on Main Street, where it had a troubled early history. Twice the business - then a cabinet shop and mortuary - burned to the ground only to be rebuilt by its industrious owners. The home also endured two major floods, March 17, 1936 and June 22, 1972. Currently the town is protected by the dike-levee system. Little is known about J.F. Sloan, although he apparently ran a diverse and productive enterprise. In 1849 he took out an ad in the Clinton Democrat newspaper in which he touted the newest products and services offered at his undertakers establishment.

John F. Sloan would respectfully inform the citizenry of Clinton County, that he has just received and now offers for sale a good and cheap assortment of hardware and groceries which he will sell low for cash at his old stand adjoining his Cabinet Ware Room on Main Street, Lock Haven. At this Main Street location, Sloan sold carpentry tools, hardware and veneering, garden implements like spades and hoes, and kitchen supplies like knives and forks. For a great many years, Sloan - and later his son, J. Nelson Sloan - were the only undertakers in Clinton County. The elder Sloan even built the first hearse in the county, described in the local media at the time as both crude and rude but which answered the purpose it was called upon to perform. Eventually the Sloan’s upgraded to a more dignified mode of transportation for the deceased, purchasing one of the most magnificent hearses in this section of the state according to the Clinton Republican newspaper.

After the elder Sloan’s death in 1871, J. Nelson Sloan became solo proprietor of the business, which thrived for more than 50 years, during which time J. Nelson Sloan was said to have buried over 6,000 people.

The Republican newspaper reported that as the only undertaker in Clinton County at the time. He was a man, the newspaper’s editors wrote, who had a wonderfully retentive memory and frequently was consulted regarding local affairs in the earlier period when Lock Haven was but a primitive village.

He died at age 75 when he was reportedly stricken with vertigo and a clot of blood appeared on the brain, which hastened the end. He had operated the undertaking business until well into his 60s, when he sold it to Charles R. Lauer.

Lauer was at the time the president of the board of trustees of the Lock Haven State Teachers College, now Lock Haven University. He was born in Thorndale, Sullivan County and attended Eckles College of Embalming in Philadelphia before purchasing the former Sloan undertaking business in 1907. During his busy life here, he was active at St. Paul’s Episcopal Church and the Rotary Club in addition to running the only funeral home in town and sitting on the board of LHSTC. In a brief 1909 write-up in the International Magazine of Industry, Lauer was described as an embalmer of marked ability, and personally superintends all funerals entrusted to his care. Upon his death in 1936, the funeral home was sold to Benjamin Harris. He, in turn, sold the business to John A. Yost 1949. By now the funeral parlor was located at 221 Second St., where it was connected by a breezeway to a beautiful Italianate building at 121 W. Main St., where it remains today.

Mr. Yost was a native of Lock Haven, having raised his two children while living above the funeral home. He was an extremely active member of the community All his clubs and activities are too numerous to mention. John was probably best remembered by being elected President of the Susque-centennial celebration held in 1983, celebrating the towns 150 year anniversary. Today, many people will stop us on the street and tell us what Mr. Yost had done for their family. Upon retirement in 1984, Mr. Yost sold the business to George A. Gedon.

George was born in Lock Haven and shortly after his birth, his parents moved to Williamsport. He graduated from Loyalsock High School and decided while in high school to attend mortuary school. George was accepted to Northampton Community College graduating in 1982. As part of his graduation requirements, it was mandatory that he do a one year internship. Since, George had ties to Lock Haven and both his maternal and paternal grandmothers and lots of other relatives were living in Lock Haven, it was the perfect area. He contacted John Yost who had been owner of the business since 1949. John was getting ready to retire and a young intern was exactly what Mr. Yost was looking for. George started working immediately. Mr. & Mrs. John Fredericks, who had been a neighbor of the funeral home for many years had an apartment for rent which worked out perfectly. While working under the supervision of Mr. Yost, George learned many valuable life lessons. Not only was John a downtown business man, but he always was very involved with the area. He made sure George became active in local organizations. To this date, George is the youngest Past-Master of LaFayette Lodge #199 in Lock Haven. It was after his one year internship that George was asked to stay on as a full time employee. A year after starting, Mr. Yost asked George if he would be interested in purchasing the business. George, who loved the area, especially the Susquehanna river and the mountains, had become very active in the Lock Haven Rotary Club, Citizens Fire Dept., the LaFayette 199 Masonic Lodge, the Lock Haven Jaycees and other organizations, was excited about the newest phase of his life.

George married Catherine Baney in 1986, they raised three children while working together at the business. Cathy also works as a Loan Processer for More Than a Mortgage in Lock Haven. Their son Michael is a Funeral Director who works for Appalachian Drilling and assists his father with the Funeral Home. They have two daughters, Kristen, a health technician/registered radiological technologist works for the Federal Government in Lewisburg, PA and Kelly who is a Safety Engineer at First Quality Tissue in Lock Haven. George and Cathy are the proud grandparents of two grandsons Silas and Turner.

The business which dates back to 1838, continues today in the beautiful historical downtown area of Lock Haven.

Although the business has changed drastically in its 182 years, the one thing that remains consistent is the integrity and sensitivity that is expressed to families during difficult times. 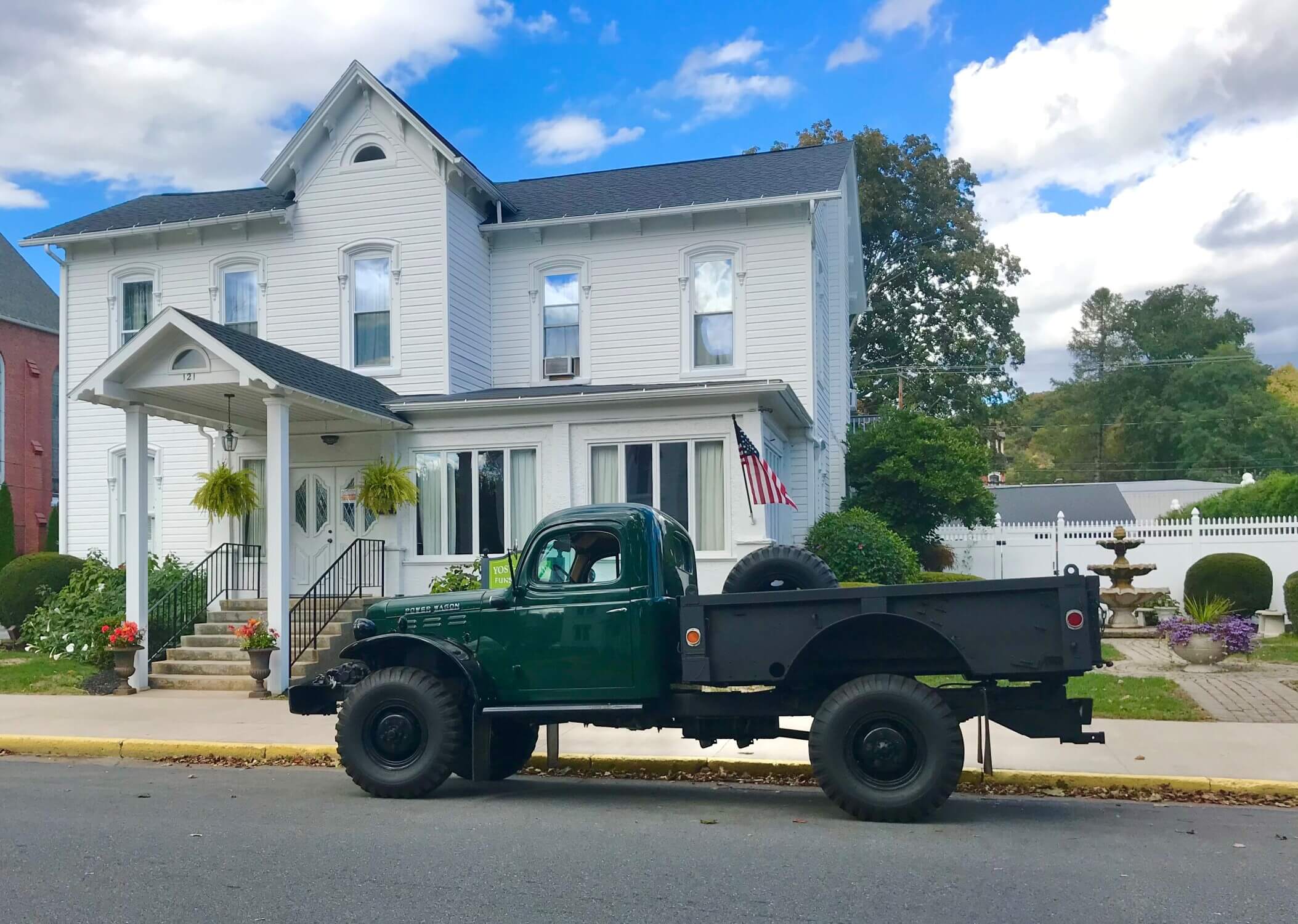 Our funeral home has been in operation for over 180 years. We are as reliable and dependable as this 70-year-old work truck. Always there for you with compassion and sensitivity in your time of need.

A year of daily grief support

Our support in your time of need does not end after the funeral services.  Enter your email below to receive a grief support message from us each day for a year.  You can unsubscribe at any time.